Click for a hub of Extension resources related to the current COVID-19 situation.
COVID-19 Resources
Menu
You are here: » What is Coastal Resilience? Why does it Matter? » The Built Environment » Building Resilience » Facilitating Resiliency » Disaster Response – Lessons Learned Given that more hurricanes are part of many climate change scenarios, what do previous major storm experiences tell us about our ability to adapt to changing circumstances?

A major-level emergency will overwhelm the ability of almost any local entity to respond and that of most states as well. The problem is getting state and federal presence on the ground once disaster strikes. (There was no federal presence in New Orleans for several days after the disaster struck). The next problem is coordinating amongst all levels of government, and staying flexible enough to cope with changing and often unprecedented conditions.

A principal lesson from Katrina, then, is to encourage more intergovernmental cooperation.  Hurricane Katrina laid bare stark deficiencies in the emergency management system of the United States.  The lessons learned from Katrina have been detailed in a number of places. The weaknesses of federal, state, and local response mechanisms are evident. Response did not go according to plan, if indeed there was a “plan.”  The overly top-down structure of the National Response System failed during Katrina. According to Harrald (2006), “the [Department of Homeland Security] has focused on increasing the discipline in the national system through an extensive development of doctrine, process, and structure, and has neglected fostering the agility (creativity, adaptability, improvisation) that has historically been the key to success.”

An additional lesson learned from Katrina and other disasters in terms of disaster response is don’t build in the wrong place. Policies and decisions at the local level have the largest impact on the natural environment and community resilience. Building in the New Orleans’ low-lying 9th Ward, among other areas, implicitly was a plan for a disaster and a plan for poor disaster response as well. The “safe government paradox” encourages people to settle in very low-lying areas by building levees. Once the levees were in place, builders were not required to elevate ground floors to the base flood elevation (BFE) level, nor were homeowners required to carry flood insurance in these areas, further encouraging complacency.

A third, related, lesson is to ensure the presence of nearby refuges that are sufficiently stout and elevated to withstand storms and flooding. The lesson of Galveston and the 1900 Storm is illustrative of the ability of a few good buildings to save lives. These sanctuary buildings must, however, be near the people who might need them (see further discussion on this in Compact Urbanism).

In contrast to Hurricane Katrina, federal, state, and local governments performed arguably better after Hurricane Ike, which struck the Upper Texas Gulf Coast in September 2008. Analyzing its response in the 2009 Management Advisory Report: FEMA’s Response to Hurricane Ike (pdf), FEMA asserted that its “response following Hurricane Ike was well organized and responsive to the needs of disaster victims. However, in some instances decisions were made outside of the [National Response Framework] command and control structure.”

One additional aspect of disaster preparedness was also evident after Hurricane Ike: in most communities, buildings that were properly elevated and constructed according to the International Residential Code fared much better than structures and homes not built to withstand hurricane impact or that were build in the wrong place. 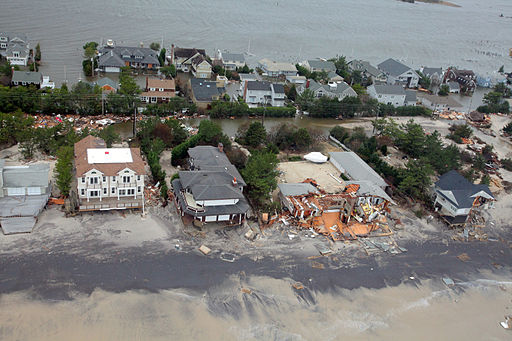 Four years after Hurricane Ike, Hurricane Sandy barreled down the eastern coast of the United States. Striking major metropolitan areas, this hurricane again brought out deficiencies in disaster planning and preparedness on behalf of local, state, and federal governments. The aftermath of Sandy revealed that state and local governments became overly dependent on federal funds for disaster response and recovery while failing to properly plan and prepare their communities for likely disasters (After Hurricane Sandy: Time to Learn and Implement the Lessons in Preparedness, Response, and Resilience).

Effective disaster response requires a balance of clear, well-defined authority with the ability to be flexible and creative. In terms of governance, this balance mirrors the previous discussion of disaster mitigation and land use planning and the need for strong state leadership coupled with local autonomy to achieve effective planning. There has been some discussion that a “single-minded devotion to home rule” posed some impediments to response in New Orleans, but there is no evidence that home rule in and of itself was any more to blame than ineptness and lack of coordination at any other level.

More research is needed in this area, but it would seem that a well-defined system of federal mandates and assistance and maximum local responsibility would be much more effective than the strict topdown structure currently being built at the federal level. Strong local participation and, where possible, control, may be key to ensuring flexibility in large emergencies.

Home rule would aid, not hinder, emergency response, if guided by adequate state and federal leadership and assistance. Strong local participation, which must mean strong local authority, is necessary to foster the distributed decisionmaking and improvisation that are critical in the face of unexpected storms, which it appears we can expect more of as a result of climate change.

Communities can increase their resilience to natural disasters by taking appropriate measures for disaster preparedness and involving all relevant stakeholders in the planning process.